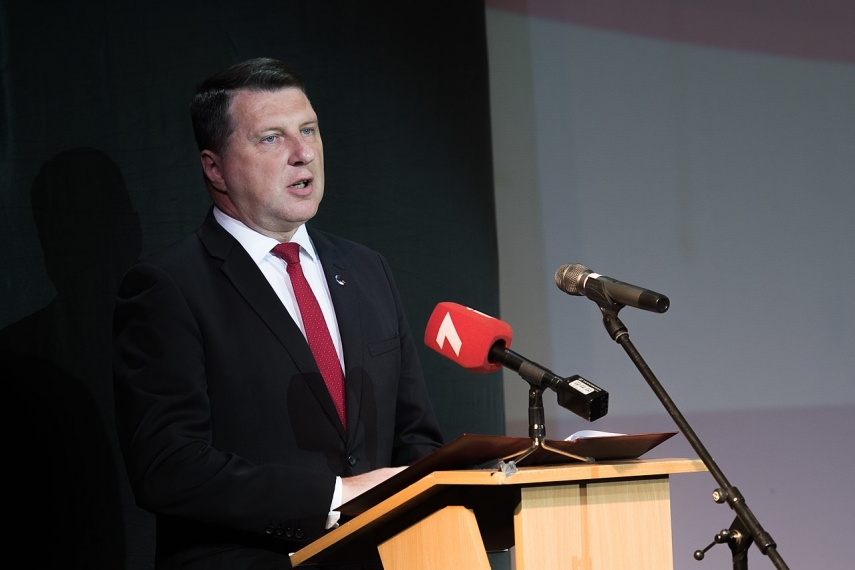 RIGA - People expect the new government to take full responsibility for the country from day one, President Raimonds Vejonis said during the first ceremonial meeting of Krisjanis Karins' (New Unity) government on Wednesday.

"The government formation process took a long time, many important decisions have been delayed, which potentially may have negative consequences for the country," said Raimonds Vejonis.

Latvia needs to have a balanced budget, so some money could be put aside for a rainy day. "Judging from global developments, we have to be prepared for new challenges," said Vejonis.

Development of Latvia is continuing, but that is largely thanks to the European Union's funds and favorable external environment - which will change sooner or later. It is therefore important for the people of Latvia to themselves create preconditions for the development of the country, said the President.

Latvia is interested in strengthening the EU's unity and cooperating with countries that share Western democratic values. Latvia has to increase its resilience to different modern-day threats, including in cyber security and climate change, said Raimonds Vejonis.

Vejonis thanked Karins for "the courage and tenacity in seeking and finding common ground with the wide range of political parties represented in the parliament" to set up the new government. He went on to say that the government must not forget about its promises to voters.

Raimonds Vejonis also emphasized that conditions had to be created for improving Latvia's competitiveness, stable and predictable tax policy, and reforms have to continue to reduce social inequality and strengthen the rule of law. "The government also has to act decisively to implement Moneyval recommendations and step up supervision of the banking sector," said the President.