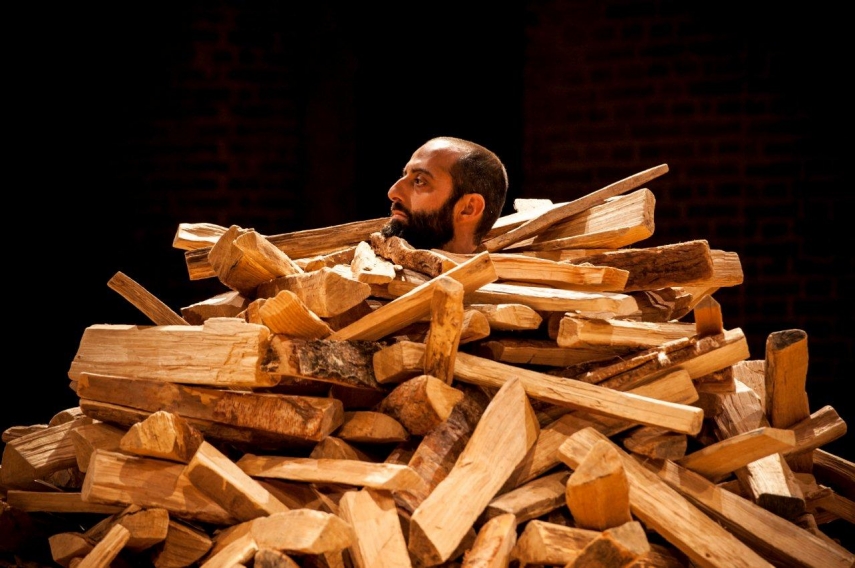 All fans of contemporary performing arts can mark 5th-10th of September on their calendars – Arts Printing House has prepared an exciting programme of New Circus Weekend’17 festival. Not only has it performances in various circus genres and venues, but a special celebration as well. Together with one of the strongest contemporary circus country – Finland – festival will be celebrating its 100th Anniversary of Independence. Finnish Embassy in Vilnius is partnering up with Finnish Institute in Estonia and helping Arts Printing House to present one of the most interesting circus performers from Finland this year. Besides Finns, professional artists from France, Belgium and Spain will also perform in New Circus Weekend’17. „We are very proud to have one of the best contemporary circus performances, that are being presented on the biggest Europe’s dance, circus and theater stages, in our programme. It is also exciting to have an opportunity to present a very special worldwide premiere – “L’Absolu” from France. The viewers will have an exceptional opportunity to dive into a real world of fantasies: more different, more mysterious, crazier and more fun every night. I would like to invite everyone to forget everything associated with a word “circus” and let themselves discover the world of contemporary circus“ – says festival coordinator Gintarė Masteikaitė.

We must face an unpleasant truth - 70% of contemporary circus industry is dominated by men. The few female students are accepted to circus schools, we see less of them on the big stage so we feel the lack of inspiring circus stories about women. Team of the New Circus Weekend wants to help break those stereotypes up so it dedicates its opening show to women. “Sisus Sirkus” is a Finland based circus company of five women. After spending over a decade doing cartwheels and surviving life with the cuteness- card, they are finally at the point where they are ready to step up on to the stage together. Girls will present a free admission show “Mosh Split” – a combination of breathtaking acrobatics, various circus techniques, winning energy and a good doze of Finnish humor.

Worldwide Premiere in a Unique Space

Imagine an old, abandoned railway station in a small French village between Paris and Lyon. Boris Gibé has worked on his project together with his team in this exact place for three years. Many people called his dream too ambitious and unrealistic: to build a stage that has never been built before. He invited a hundred of his best friends and colleagues from the whole world to the first presentation of this new project. After that it was clear that a huge adventure waits for the viewers of this performance. On that hot summer night it was decided that the premiere has to happen in Lithuania. A twelve meter high metal circus arena “Silo” will be built in Lithuania for the first time ever. Boris Gibé, who comes from France with „Cie Les Choses de Rien“ team, will perform five times inside “Silo” with his newest show “L’Absolu”. Creator of the show calls it a “metaphysic circus” and aims to reveal our secret unconscious wishes, to talk about a fight with ourselves and with our dark and light sides. The choreography of this philosophic performance is complemented by high quality physical theater and acrobatics. The viewers will also have a new experience of an unusual performance space where they will be seated up in four floors and will watch the show from above.

Languages of Juggling and Humor

Jugglers of French company “Ea Eo” joke that the underlying message of their creative work is as unclear as possible, so that the artists themselves do not know if there really is a meaning, or if it's all just a joke told in a language that no one understands. And in fact, the charismatic five tries to talk about everything in languages of juggling and humor and says that these are the only languages they know. By their own account, “a performance as an antidote to the obtrusive and omnipresent doctrine telling us that we are only one purchase away from a more beautiful, youthful and happy life.” Colorful and filled with professional juggling rhythms performance does not fear of being imperfect and invites others to embrace their imperfections too.

To Give Your Fate into the Hands of Viewers

„Pelat“, according to the artist Joan Català, is an "experiment, which has become a spectacle". Performance is distinguished by the use of audience participation.  According to Català, his goal is to remind people of the value of “collective work" and to recover "handmade, artisan work, not technology." During his performance of Joan Català interacts with the audience to recall an “ancestral” time in which people worked on the land with animals and with great physical effort. Choreography of the show is also filled with traditional Catalan culture elements, for example - building of a human pyramid called “anxaneta”. For that the performer takes a huge wooden log, ropes and… a few audience members. An audience will get to watch a very dangerous-looking climbing to the top of the log, held by four men from the audience. Performance author Joan, who was born in Barcelona, understands the scene as a space for dialogue between humans, objects and the environment where game and work melt together with the tools, experiences and ideas that each of us bring.

Performing arts master Claudio Stellato says he does not understand abstract form of a circus object. A white juggling club for example. So he chose something more interesting for his piece – eight hundred wooden logs. Circus and dance performance “La Cosa” stages the connection between four characters and a giant pile of wood. Through an intense and rhythmic physicality, that pushes the limits of the body, four men on stage proceed to shape and destroy the pile of wooden logs. Between chain play and ritual following, “La Cosa” reflects on the basic bond between man and nature. Choreographer and performer of the show, Italian Claudio Stellato, is a multidisciplinary artist who lives and works in Brussels. He started creating this piece while in Art Printing House’ residency “Print Art On Stage” and got it nominated Best Circus Performance of the Year in Brussels in 2016.

A female duo from Finland „Duo Kamppi & Roihu“ will take their viewers to the forest and invite them to take a breath of fresh air, hear the silence of the forest, listen to traditional Finnish songs and enjoy acrobatics between the trees. Project creators and performers Viivi Roiha and Sade Kamppila believes that people, who grew up in the city, often feel the lack of nature harmony, so they suggest them to come to the forest together, search for their roots, try to believe in magical forest powers again and move away from the concrete jungle. Very intimate and sensitive performance will present various contemporary circus techniques and fearless, raw relationship between human and nature. Viivi and Sade have already presented this piece at some unexpected corners of nature and have trained in the world wide known Swedish contemporary circus company „Cirkus Cirkör“.

Find all the festival information at www.menuspaustuve.lt/en. Festival is supported by Lithuanian Council for Culture and Ministry of Culture of The Republic of Lithuania