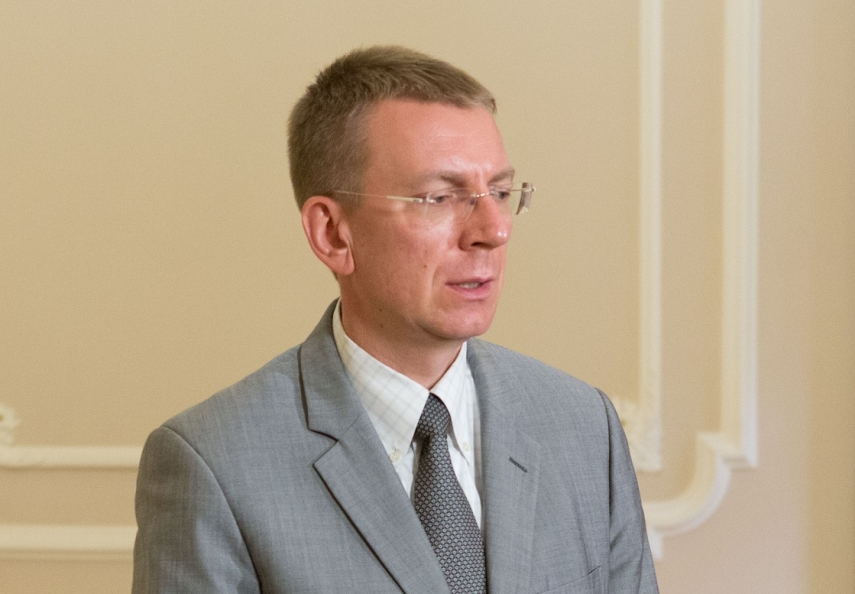 RIGA - NATO’s success had been determined by its ability to respond to the most immediate security concerns of its member states, Latvian Foreign Minister Edgars Rinkevics (New Unity) said at a seminar organized on Wednesday by the the United States Defence University and the Baltic Defence College, BALTDEFCOL, in Tartu, Estonia.

At the seminar, Rinkevics delivered remarks on the importance and influence of NATO in the international security environment, LETA was told at the Foreign Ministry.

In his address, the Latvian foreign minister drew attention to the fact that, in an increasingly multipolar world characterized by unbridled competition and increasing distrust, NATO was crucial for responding to strategic challenges and ensuring global stability.

"The Alliance remains a token example of how effective multilateral cooperation can be in defending the international rules-based order. This role of the Alliance should not be underestimated because a well-functioning, rules-based international order is also a crucial safeguard that can help insulate smaller states from the geopolitical ambitions of Great Powers," Rinkevics said.

The minister pointed out that since NATO's founding 70 years ago the Alliance's success had been determined by its ability to respond to the most immediate security concerns of its member states. Such was the case with existential conventional threat posed by the Soviet Union during the Cold War, or the ethnic conflict in Balkans in the nineties and the international war against terrorism in the aftermath of 9/11 attacks in the US.

"Today NATO has returned to its core task of collective defence in light of Russia's aggression against Ukraine, which fundamentally challenges security in Europe. NATO has reaffirmed its readiness to stay relevant in the new era. There is a little doubt that Russia will continue to cause a long-term security challenge in Europe and beyond. Therefore, NATO must have credible deterrence and defence in place. A lot has been achieved to strengthen NATO's eastern flank by implementing decisions adopted at the NATO summits in Wales, Warsaw and Brussels," Rinkevics said.

He also underlined that further work was still needed to strengthen the deterrence and defence of NATO. "We need to continue building larger, more capable forces as envisioned by the NATO Readiness Initiative. Furthermore, as stated by NATO Secretary General Jens Stoltenberg, we need to ensure the ability to get the right forces at the right time at the right place. Implementation of a viable reinforcement strategy is key to achieving this goal. Further work to improve air defences in the region plays an important role in this regard. All these lines of effort require substantial financial investment, therefore progress towards fairer burden-sharing among NATO member states remains crucial," the Latvian minister stressed.

In his speech, the minister also turned to the NATO-China relations. "No doubt, there is genuine potential for partnership and political dialogue between NATO and China, but China's rise also presents a challenge. The country is a growing economic power, and also a military one. It is positive to see that there is an increasing transatlantic consensus about multifaceted challenges that stem from China's policies, ranging from its activities in the South China Sea to potential risks related to Chinese communication technologies. We have to better understand the size and the scale of China's influence, and what it means for our security. For this reason, we welcome the Allied decision to undertake an assessment on China, which should produce its first results by the end of the year," the minister said.

In the context of hybrid threats, Rinkevics expressed his conviction that NATO needed to continue developing strong relations with other international organizations, primarily the EU.

"The EU and NATO can mobilize a broader range of instruments and use resources more efficiently to deal with security challenges. Here, a close coordination and cooperation between both organisations is crucial to ensure that their efforts are mutually complementary and beneficial. The ongoing work on the facilitation of the military mobility, countering hybrid threats and coordinated exercises are some great examples," stated the Latvian foreign minister.