Lithuanian support for America and NATO notably higher than the EU’s, yet dismal for Donald Trump 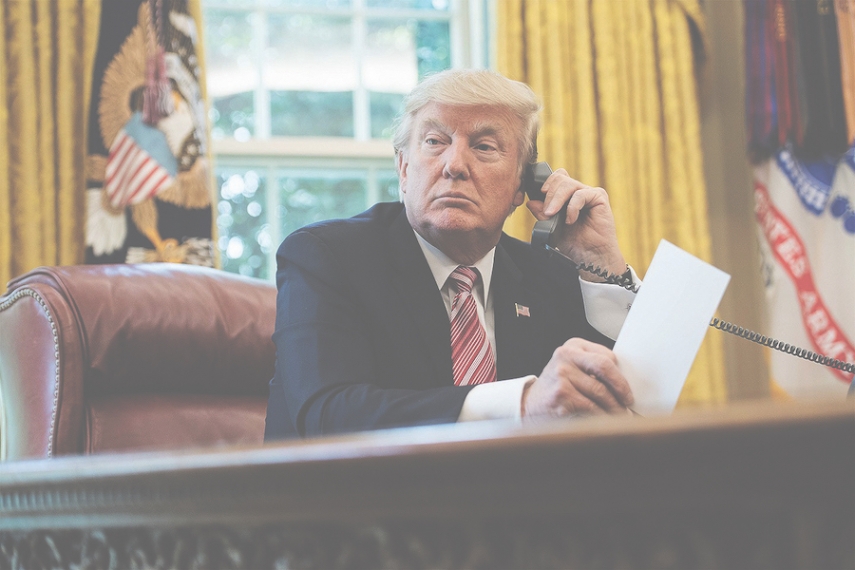 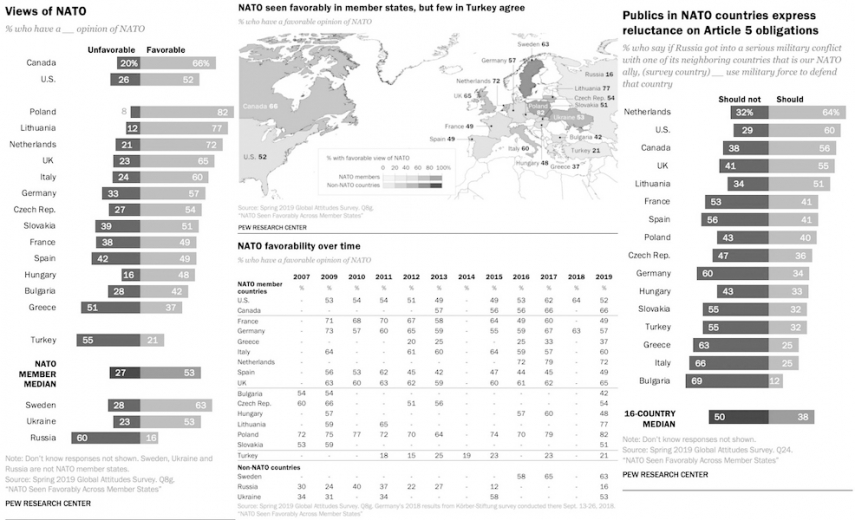 The topic itself is, well, blasphemous and is discouraged by Lithuania’s top political establishment, yet the naked truth is that Lithuanians, although very pro-American and pro -NATO, largely disdain Donald Trump, the president of the United States, Lithuania’s key ally, showed a February survey by pollster “Spinter tyrimai.”

Conducted in the wake of the US assassination of Iranian Quds Force leader Qassem Soleimani in Iraq, the survey showed that, unlike in Western Europe, where the killing stirred indignation, 24.3 percent of Lithuanian respondents expressed their support for the annihilation (24,9 percent were against it though), and a sizeable 36 percent were neither against nor for the taking-out. Emphasising Lithuania’s being one of the staunchest US allies in its warfare, the pollsters, however, produced some startling results to many regarding the popularity of US President Donald Trump in the Baltic country. Only a mere 5.9 percent view Trump activity positively, 17.5 percent are rather positive than negative, 20.2 percent said they saw it in a negative light and a chunky 38.3 percent viewed it rather unfavourably than favourably.

More than average support for the US in the Middle East

Interestingly, when enquired if Lithuania ought to contribute to US warfare in the sizzling spots in the Middle East, 18.9 percent of respondents answered affirmatively. Most of the young respondents and seniors said they were against any militarily engagement by Lithuania in the US-led war actions. This does not surprise Lithuanian political analysts.

“Like many Europeans, Lithuanians would rather support US foreign policy and security policy initiatives through diplomatic, peaceful means, with no militarily engagement. There is an understanding that such contribution entails spending money and other risks. So with the general support for the United States, there are certain apprehensions when it comes to a practical contribution,” Margarita Seselgyte, head of the Institute of International Relations and Political Science at Vilnius University, was quoted by Delfi.lt.

The support level for Lithuania’s military assistance to US warfare in the Middle East at 18.9 percent is a “good number”, believes Audrius Baciulis, a Lithuanian political commentator, who is dubbed by Lithuanian media as one of the staunchest Trump supporters in Lithuania.

“It shows me that the Lithuanian public viewed the annihilation of Soleimani positively and maturely. It entails the perceived duty to assist the US as our key ally, although the Middle East is not part of NATO…What is really important to me is that, unlike Western societies, we are keen to support Americans,” Baciulis told Delfi.lt

A recent PEW Research Lietuva survey also found Lithuanians among the biggest NATO supporters. In 2019, 77 percent of Lithuanian respondents viewed NATO favourably, up 18 percent from 2007. Meanwhile, NATO approval was slumping in both Germany and France.  When asked if Lithuania should join NATO forces in case of a hostile attack against a NATO member, Lithuanians followed the Dutch, Americans, Canadians and Brits who replied “yes,” 62, 60, 56, 55 and 51 percent, respectively. Bulgarians, Italians, Greeks and Turks were least supportive of the victim. Respectively 69, 66, 63 and 55 percent of respondents in the countries replied they would not support collective defence of the NATO member state under attack.

However, the issue of unlikability of Trump by the Lithuanian population divides local analysts.

“There is naturally the question of how much respondents are informed about and aware of Trump politics and policies? Most perhaps reflect the trope of Trump conjured up by the media. I believe the reputation he has in the media is not very good. Thence the poll results,” reasoned Seselgyte. “

Meanwhile, Baciulis lashed out at Lithuanian media, blaming them for the dismal approval of the US President. “To me, everything is very simple: this is the result of the last three years’ anti-American propaganda ongoing in nearly all media,” he said, naming the concrete names of editors-in-chief of Lithuania’s main online and TV media outlets which, he believes, also are contributing to the “anti-Trump” sentiment.

Analyst: Trump is not America

According to him, propaganda against Trump amounts to propaganda against the United States itself. But approached by The Baltic Times, Vytautas Bruveris, senior analyst of daily “Lietuvos rytas”, ridiculed the notion of his colleague.

“There are definitely many people in Lithuania’s political establishment and among the commentators too, who believe that by criticising Trump we are criticising America itself. But this is nonsense. We just cannot have holy cows in a democratic society and the difference between our support for the United States and our take on Trump has to be made distinctly. Trump is not America and vice versa. With the access to international news outlets, the scandals plaguing Trump – I mean his previous lash-outs at the European Union and NATO, his impeachment scandal stemming from his ambivalent arrangement of assistance to Ukraine, the payment of hush money to a former porno star and many other things – could not have been left unnoticed by Lithuanians either,” Bruveris told The Baltic Times.

The US perceived as Lithuania’s guarantee

Reflecting on Lithuania’s higher-than-the-EU-average support for the US, the commentator emphasised that America has been perceived as Lithuania’s key ally for many decades now, so the factor of tradition does play a significant role in the ratings.

“Unquestionably, America is seen as perhaps the only guarantee to preventing Russia’s aggression,” he said.

Asked to weigh in on the ongoing 2020 US Democratic Party presidential primaries, Bruveris reasoned that Joe Biden would suit EU interests best.

“His rhetoric is least radical, he embodies the continuity of the Obama years. For the European Union, another 4 years of Trump would be perhaps too much to bear. He has repeatedly spoken out in favour of disintegrational processes in the bloc and NATO. But apart from Biden, the other Democratic candidates bode little predictability to Europe too. It seems to me that radical candidates, like Bernie Sanders, are now facing the best chances of receiving the Democratic nomination. I am sure he would not be a candy for the European Union either,” Bruveris said.

No concerted effort to harm Trump

Meanwhile, Kestutis Girnius, associate professor at the Institute of International Relations and Political Science at Vilnius University, told The Baltic Times that he was “quite baffled” by the lukewarm Trump support among fellow Lithuanians.

“That America is very popular with Lithuanians is not surprising. It has been that way for decades as the perceived guarantee ensuring Lithuania’s safety against Russia. That Trump is not in Lithuanians’ favour is surprising. As far as the Lithuanian media is concerned, I do not see any concerted effort to present Trump in a negative fashion here. On the contrary, Trump has tightened up sanctions against Russia, he pledged unwavering US support to the Baltic presidents he met in the beginning of his term and so on,” Girnius said before adding: “However, there are a bunch of reasons to dislike Trump. As someone has pointed out candidly, he has the intellectual and emotional maturity of a five-year-old toddler. Yet, again, he has done nothing bad for us, so my assumption is that those never-ending scandals he finds himself in continuously have a bad effect.”

Similar surveys in other European states produced similar numbers on dislike for Trump. According to a survey of 60,000 people across 14 EU countries, conducted by the European Council on Foreign Relations last year, less than one in 20 Europeans trust Donald Trump. “Our polling confirms that Trump is toxic in Europe, and that this is feeding into distrust of the U.S. Security Guarantee,” report author Susi Dennison, director of the European Power programme at ECFR was quoting as saying. “The fact that Europeans are split on whether defence resources should go to the EU or NATO, suggests that they no longer have the confidence in the alliance they once had.”

According to the survey, Europeans place more trust in the EU than their national governments to protect their interests from global powers like America and China. The one exception was Poland, where citizens trust the United States over the EU to defend them against Russia.