Lithuania already has a synchronisation-ready link with Poland: Litgrid has completed the LitPol Link expansion project 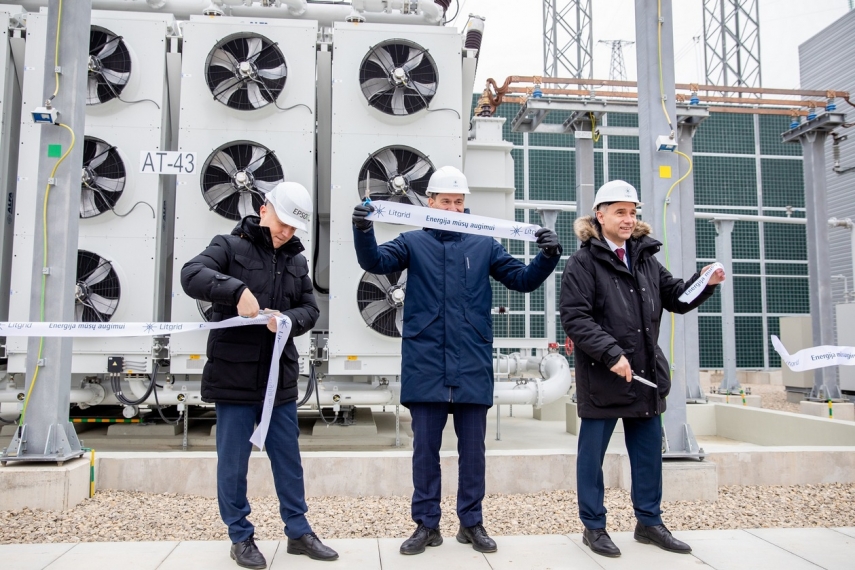 Litgrid, the Lithuanian electricity transmission system operator, has successfully completed the expansion of LitPol Link, the interconnection between Lithuania and Poland. This is one of the most crucial of the four synchronisation projects already implemented so far, as the upgraded LitPol Link station near Alytus is now capable of operating in the synchronous mode with the Continental European Synchronous Area.

"The synchronisation of the Baltic States with the Continental European Synchronous Area is the first and the foremost project of the national security, which enables Lithuania, Latvia and Estonia to manage their electricity systems on the same frequency with reliable partners independently. Preparations in the four countries continue to progress rapidly, and we are moving steadily towards the goal of the synchronisation in 2025. However, we already have the most important part - the upgraded LitPol Link. This means that from now on, no one can leave us as an isolated energy island: if necessary, we will be able to connect to the Continental European Synchronous Area soon," said Dainius Kreivys, the Minister of Energy of Lithuania.

"Six years ago, LitPol Link became Lithuania's gateway to the West in the terms of trade, enabling the import and export of the electricity between Lithuania and Poland. Now it will play an even bigger role: from 2025, it will be the gateway for all three Baltic countries to connect their power systems to the European partners’. LitPol Link will operate as usual for the next few years, while we build the Harmony Link, the offshore link to Poland, install synchronous condensers and carry out other preparations for the national networks and system management. However, it is now the key guarantee for the security of the Baltic electric energy systems," said Rokas Masiulis, CEO of Litgrid.

The LitPol Link expansion project consisted of the reconstructions of the LitPol Link switchyard, the Alytus transformer substation, and the nearby 330 kV and 110 kV overhead transmission lines. One of the main elements of the upgraded LitPol Link switchyard is the installation of three most powerful 410/345/10.5 kV, 600 MVA autotransformers in Baltic countries. They will allow the Baltic and the Continental European Synchronous Area to be interconnected at the same frequency.

Litgrid, together with the Polish operator PSE, plans to test the synchronous operation via LitPol Link should unforeseen reasons make synchronisation necessary before 2025.

The total cost of the LitPol Link expansion project is €22.5 million, partly financed by the Connecting Europe Facility.

After the synchronisation, 700 MW of Harmony Link will be available for trading instead of the existing 500 MW LitPol Link, while LitPol Link will be used only for the system needs from 2025 onwards.

The 500 MW LitPol Link is a project of two 163 km long 400 kV transmission lines Alytus-Elkas and a converter station in Alytus. The link became operational in 2015.

The expansion of LitPol Link is one of the 15 projects in the Synchronisation Programme of Particular National Importance (SPNS) approved by the Government of Lithuania, which includes the construction of a new Harmony Link offshore link to Poland, the installation of 3 synchronous condensors, the strengthening of the national grid, and the improvement of the system control and IT.

To date, 4 synchronisation projects have been accomplished. These are the expansion of the 330 kV Bitėnai transformer substation, the construction of the 110 kV Pagėgiai-Bitėnai overhead line, the reconstruction of the 330 kV Lietuvos elektrinė-Vilnius overhead line, and the expansion of LitPol Link. In total, almost 40% of the work needed for synchronisation will be completed by the end of this year in Lithuania.

Until now, Lithuania, Latvia and Estonia, together with Russia and Belarus, have been operating in the IPS/UPS system, the electricity frequency being centrally controlled by Russia. Connection to the Continental European Synchronous Area and the synchronous operation with Poland, Germany and other Continental European countries will be ensured by the end of 2025 at the latest.

AB Litgrid, the Lithuanian electricity transmission system operator, supports the stable functioning of the country’s energy system, controls electricity flows and creates conditions to compete in the open electricity market. In Lithuania, the company owns more than 7 thousand km of overhead lines, over 230 transformer substations and 17 inter-system lines connecting to other countries, constantly maintaining them to ensure appropriate electricity transmission for all residents, institutions and other organisations in the country.

Since 22 December 2010, AB Litgrid has been listed in NASDAQ OMX Vilnius stock exchange secondary list. 97.5% of AB Litgrid is owned by UAB EPSO-G which is 100% owned by the Ministry of Energy of the Republic of Lithuania.