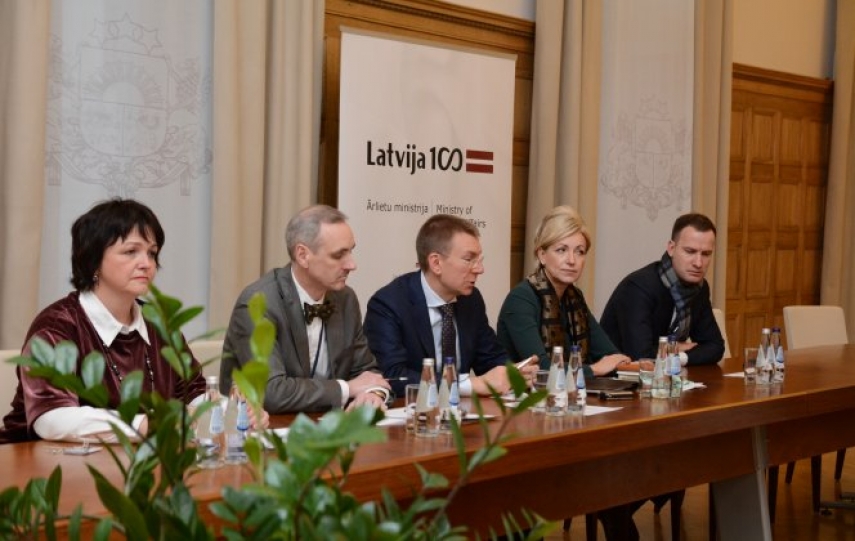 RIGA - On 10 January, Foreign Minister Edgars Rinkēvičs had invited representatives from the Latvian media to a meeting in order to inform them about the contribution provided by the Foreign Service to centenary events and the public diplomacy programme coordinated by the Ministry of Foreign Affairs as part of the celebration of the 100th anniversary of the Republic of Latvia abroad in 2017 and 2018.

During the conversation, the Foreign Minister stressed that due to Latvia’s centenary the ministry and embassies will have an additional opportunity for reflecting on the century-long history of Latvia, on the achievements of our people in sports, culture and other areas. Latvia is a member of the EU and NATO with a dynamic cultural life. The Latvian embassies, given their knowledge of the environment and traditions in the host countries, are tailoring their centenary programmes accordingly.

The Minister explained that the Ministry of Foreign Affairs will mobilise additional funding for public diplomacy events abroad. The centenary is an excellent opportunity for attracting the attention of our foreign cooperation partners to Latvia’s achievements and promote further cooperation in economic, cultural and other types of projects, said the Minister. This, he added, can draw the spotlight on Latvia, expand the network of its cooperation partners and raise Latvia’s profile on the global scale.

Gints Jegermanis, Head of the Foreign Ministry’s Communications Directorate, Mārtiņš Drēģeris, Foreign Minister’s Advisor, and Vita Timermane-Moora, Centenary Projects Coordinator, explained to the journalists in more detail how the Latvian embassies and representations are implementing the projects and how they are analysed and approved by a special Foreign Ministry commission. The speakers also presented the work accomplished in 2017, and this year’s programme.

The media representatives were informed that as soon as in January everybody in Latvia would be able to follow the embassies’ centenary programme on the MFA website, where all embassy projects approved by the MFA would be presented in a calendar format. The 48 Latvian diplomatic missions are planning to carry out a large number of projects in more than 60 countries.

The Foreign Ministry’s public diplomacy programme for the centennial of Latvia (2017–2021) has been designed with a view to contributing actively to the priority areas of Latvia’s foreign policy – economic growth, national security, the unity and effectiveness of the EU, and the European Neighbourhood Policy. In this context, the centenary programme is a perfect opportunity to draw our foreign partners’ attention to what Latvia has achieved and to promote further cooperation, for instance, through projects in economy, security, culture, and education.

The public diplomacy programme offers support for current cooperation and the promotion of contacts between various public institutions and the private sector in Latvia and abroad, including the centenary diaspora programme and the international cultural programme, thereby imparting national significance to the events. For broader outreach, special attention is given to information on Latvia in foreign languages.

In 2017, the public diplomacy programme coordinated by the MFA comprised 68 events in 25 countries, including exhibitions in Kaliningrad (Russia) and Helsinki (Finland), presentations of a study report “One Hundred Years of Latvian Foreign Service” in Austria and Ukraine, the Latvian Days in Bilbao (Spain), the Latvian Week in Parnu (Estonia), the Baltic Day in Dublin (Ireland), the Baltic Days in the United Nations (New York, the US), trips by Egyptian, Korean and Ukrainian journalists to Latvia, a touring exhibition on Latvian architecture, a publication and a symposium in Japan, the Latvian Film Days in St. Petersburg (Russia), support for the participation of Latvian cinema experts in festivals in the US, Russia, Egypt, Hungary, Sweden, and Luxembourg, a publication on the history of Latvia in Belarusian, studies on bilateral relations (Ukraine, Italy, Turkey), presentations of books and translations in Italy, Belgium, Russia, and Belarus, and public diplomacy support for music and visual art projects in Russia, Italy, Lithuania, the Netherlands, Canada, the US, Finland, Japan, and Germany.

More than 80 events have already been approved for the first half of 2018.