Iraq’s Kurd in Riga: Baltics need to be more friendly towards small business 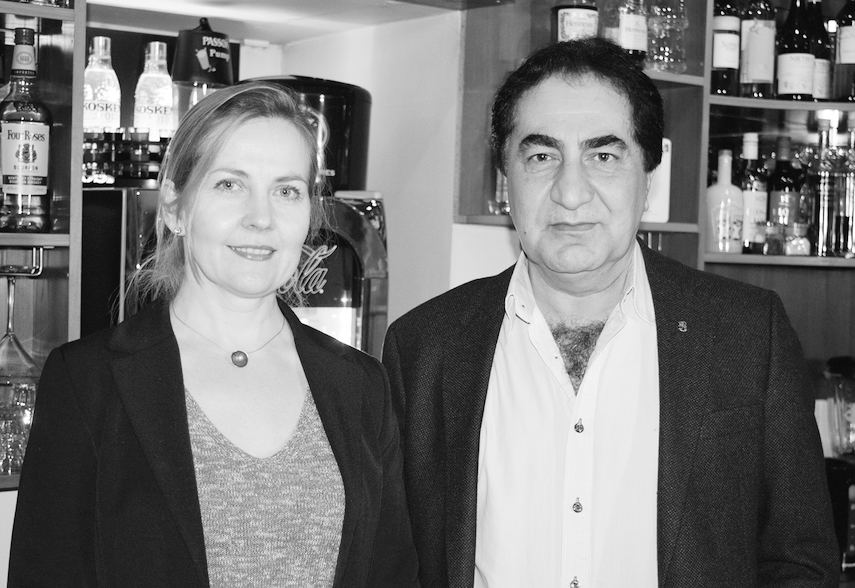 Hewa Karim, the owner of Karjala Bar and AKA Restaurant in Riga’s Old Town, with his wife Jana

“Local Governments need to be more friendly towards small businesses, otherwise they and their staff will disappear.” A stark warning from Hewa Karim, the owner of Karjala Bar and AKA Restaurant in Riga’s Old Town. “This applies all over the Baltic States I’d imagine, but especially here in Riga. Our workers have no incentive to stay in Latvia and it’s difficult to find quality replacements. Small businesses are the lifeblood of the Baltic States, and especially here in the tourist areas of Riga. They’re disappearing fast, and those that remain need government help in terms of taxation, planning and employment legislation.”

We were talking about his extraordinary life and how he came from Northern Iraq to settle in Latvia. Now in his late 50s, Hewa (pronounced Heva) is the oldest of eight children. His parents were professional people, and Iraq in those days was modern, attractive and a good place to live. Kurdish by birth, he’s now firmly European. At the age of 18 he’d always wanted to be a pilot, and to do that he had to study abroad. He bought an Interrail pass and set off on his travels through Europe. He could already speak Kurdish, Arabic and English. He ended up in Sweden and decided to study there. He learnt the language and became a translator for the Swedish Police in Uppsala, and continued his studies in the evenings. After four years, Hewa travelled to Finland to enrol at an aviation college. Although he gained his pilot licence, he couldn’t work for Finnair or others, as he wasn’t a Finnish citizen, He married and settled down in Finland, but his entrepreneurial spirit was looking for new opportunities. He decided that his home town of Parkano, north of Tampere, needed a hypermarket, and so he set about opening not just one, but three.

Called Helen's Supermarket after his daughter (who later became a finalist in the Miss Finland competition for Miss World), he employed 25 people and he still owns a house outside the city. Finland became his home for 35 years. However, after 17 years of running his hypermarkets, he decided another direction was called for. Competition was increasing very quickly, and the big names were taking their toll. And so, after selling his shops, Hewa went into the import/export business, concentrating on furniture and clothes to and from Turkey and Dubai. With his new company, Jet Trading, flourishing, especially in the fashion market, he opened boutiques and antique shops in Finland. His antique shop is still in business, and run by a manager. Hewa travelled a lot during this time, and many times his schedule involved a stopover in Riga. He loved the Baltic mentality, much like the Scandinavian people, and of course the Art Nouveau architecture. On one such visit he met Jana, a woman from Riga, and they fell in love. They shared many interests, and Hewa knew at once she was a woman that he could trust, something that was to prove important to him in the future.

During his frequent visits to Riga, he noticed the popularity of international restaurants such as Japanese, Romanian, and Uzbekistanian, but nothing from Scandinavia. He decided to look for a property where he could open a place specialising in cuisine from Finland. That was when he discovered how difficult it was to overcome the bureaucracy that existed seven years ago. Used to being able to open new businesses easily in Finland, it was a shock to him that government departments here had no communication with each other. For example he was given the ok to place a wooden terrace outside with tables and chairs, only to be told two weeks after it was installed that he’d have to take it down. Last summer road works completely closed the road outside his bar without prior notice, and passing trade ceased completely overnight. These works lasted all summer, and no compensation for loss of business was contemplated by the government. Like many others in the area, it wasn’t just his business that suffered. His staff did as well. Good and reliable staff are important to Hewar, and they also rely on him. But decisions like this don’t make it easy for him.

Last year you decided to expand?

Yes, Jana wanted to offer Latvian cuisine. She’s is an excellent cook. And by chance a property opposite the Karjala became vacant, and in time we opened it as AKA offering Latvian food and beer.

How important to you is the Finnish-Latvian Chamber of Commerce?

They’re a big help. I’m now a board member and we have monthly meetings here. When I first came there were many Finnish companies such as Prisma and Hesburger, and Stockmann, and a large Finnish community. We have good connections with the Finnish Embassy and other chambers of commerce, as well as local government departments.

Do you have time for any hobbies?

Yes, Flying of course is important to me. I fly a private plane when I need to go back to Finland for business, and also for pleasure trips around Latvia. I have to take a yearly examination to keep the licence, which is recognised throughout the European Union. I fly a Cessna Cardinal which has a range of about five hours without refuelling. The other love of my life is fishing. There are thousands of lakes all over Finland, and there are several near my home. I have a small boat and catch mainly pike. Large fish with big teeth! Usually between three and five kilos each, I can easily catch between 10 and 12 fish on each trip. It’s a relaxing hobby that takes my mind off business matters.

What about the future?

Well as I said before, the Government needs to change its attitude. Yes, it’s improved over the past seven years, but still young workers are being forced to leave the country, and finding replacements is becoming more and more difficult. We need to be able to employ persons from, for example, Belarus and Ukraine, but to do that we need a change in the Latvian employment laws. To keep Latvians here, we must offer better wages and better prospects. They see their friends in, say, Denmark and Germany having a better lifestyle there and they’re tempted. The cost of living is not cheap here. High taxes for both personal and business people make it difficult. And many business people have given up because of the problem of finding suitable employees. In just a small business like this, we employ 10 people and we have a responsibility to them to keep this business open. They have families and they rely on us to give them a good wage. Since I opened my business here there’s been a lot of change for the better, but in the future the changes need to come quicker before it’s too late. Latvia is a good country with wonderful people, but things need to change. The disposable income of the average Latvian is less than it was a few years ago, but that also applies to tourists from European countries. So, we’re working harder just to stand still. However, I’m confident in the future that our politicians will see what needs to be done, and, more importantly, see that it has to be done quickly.