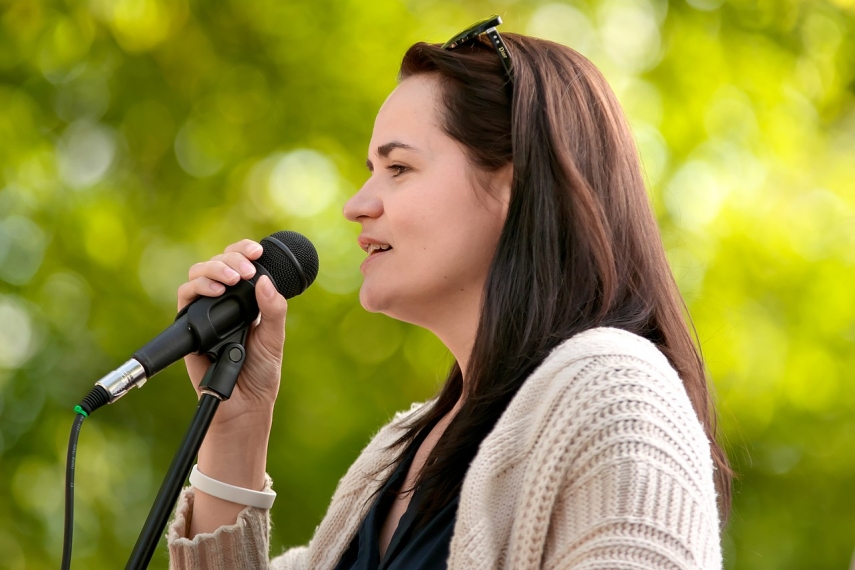 VILNIUS – Svetlana Tikhanovskaya, a participant of the recent presidential election in Belarus, says she now considers herself a national leader whose key mission is to help the people of Belarus to hold a fair and transparent election.

Forced to flee Minsk after the presidential election, Tikhanovskaya says she chose Lithuania as she had the country's visa and her children were already in the country, adding that she feels completely safe in this country.

In an interview with BNS, Tikhanovskaya says Belarusian President Alexander Lukashenko's decision to put the country into full combat readiness is just usual intimidation of people but Belarusians will no longer be intimidated.

It was her first interview with the Lithuanian media.

– WHAT WOULD BE THE CORRECT WAY TO CALL YOU? A FORMER PRESIDENTIAL CANDIDATE? THE PRESIDENT-ELECT? THE OPPOSITION LEADER OR SOMETHING ELSE? HOW WOULD YOU CALL YOURSELF?

– I would now call myself a national leader.

– It happened so that I, Svetlana Tikhanovskaya, have become a symbol of the Belarusian people's fight for their rights. For that right to speak, the right to choose, the right to defend one's freedom.

– WHAT DO YOU CONSIDER TO BE YOUR MISSION AT THIS MOMENT?

– My mission now is to support the nation defending its voice, its freedom of choice, and help the people of Belarus to hold a fair and transparent election.

– IN WHAT WAY YOU COULD IMPLEMENT THAT?

– YOU LEFT BELARUS FOR YOUR OWN SECURITY AND THE SECURITY OF YOU FAMILY. WHY DID YOU CHOOSE LITHUANIA? HOW DO YOU FEEL HERE? DO YOU RECEIVE ALL NECESSARY SUPPORT?

– We had Lithuanian visas. My children were already here. I just came to be with them. I feel completely safe in Lithuania. I see Lithuanians' good-willed attitude and great willingness to help us as well as huge support for all Belarusian people.

– LUKASHENKO PUT THE COUNTRY INTO HIGHEST-LEVEL COMBAT READINESS ON SATURDAY DUE TO ALLEGED NATO MOVEMENT IN LITHUANIA AND POLAND. WHAT DO YOU THINK HIS INTENTION IS AND WHAT CONSEQUENCES IT COULD HAVE WITHIN THE COUNTRY?

– It's a step the people of Belarus are already accustomed to. That's usual intimidation of people. But Belarusians are no longer afraid and are ready to defend their rights. Nobody believes the president anymore.

– IS THERE A RISK THAT TROOPS COULD BE SENT TO THE STREETS TO FIGHT WITH DEMONSTRATORS?

– You now, our demonstrators, as you call them, are simple people. They are taking the streets not to fight, they are doing so to show their disagreement. If the army executes this criminal order, it will be a crime. Because they are Belarusian people as well. Belarusians cannot beat Belarusians.

I am more than convinced that the majority within the army and the police realize that.

– IT'S BEEN TWO WEEKS ALREADY SINCE THE PRESIDENTIAL ELECTION IN BELARUS, AND THERE ARE ONGOING RALLIES, DEMONSTRATIONS, STRIKES. BUT LOOKING FROM THE SIDE, IT SEEMS THAT THE REGIME HAS NO INTENTION TO WITHDRAW. WHAT'S NEXT?

– You know, Belarusian people will never be the same as they were. If you think everything will die down, it won't happen as people have awoken and will no longer be able to live with government they do not accept and cannot forgive for all the crimes it has committed.

– BUT IT CAN TAKE A LONG TIME?

– It might take a long time, or not, if the government realizes that Belarusians won't change and that Belarus has made its choice and that (people – BNS) have made the decision to defend their rights.

Belarusian won't back down either. The government has always said that it's on the side of the country, on the side of Belarusians, therefore, it has to realize that for this crisis not to get deeper, it must make that decision and enter into negotiations.

– IN YOU OPINION, WHAT OTHER INSTRUMENTS AND WAYS CIVIL SOCIETY COULD EMPLOY TO BE HEARD BY THE GOVERNMENT?

– Listen, we are not fighting to be heard, that's just the will of people. Yes, they want to be heard. They are taking the streets with this message. I believe they are using all legal ways to express their will.

– THERE ARE NO NEW INSTRUMENTS?

– Well, our people are creative. They will probably think something else.

– WHAT COULD BECOME BREAKING POINT, IN YOUR OPINION, WHEN THE REGIME WILL REALLY RETREAT?

– COULD YOU TELL MORE ABOUT THE COORDINATION COUNCIL, ITS ACTIVITIES AND WHAT MANDATE IT HAS?

– The Coordination Council is only at the beginning of its road. Its presidium has already been formed and working groups are being set up and they will have their areas of activity and directions. The end goal is to have dialogue with the government for a new, fair and transparent election to be held.

– BUT THERE'S BEEN NO DIALOGUE SO FAR?

– We are at the beginning of the road yet.

– ARE YOU IN CONTACT WITH OTHER BELARUSIAN OPPOSITION PARTIES, MOVEMENTS? ARE THERE ANY JOINT PLANS AND STRATEGIES BEING DRAFTED?

– YOU ARE THE OPPOSITION TO THE REGIME.

– WHO COULD BE A JOINT CANDIDATE DURING A NEW ELECTION?

– Any willing Belarusian citizen could stand for election in a new, fair and transparent election. That's why it could be considered a fair election.

– SINCE YOU CAME OUT OF SELF-ISOLATION RECENTLY, WHAT ARE YOUR UPCOMING PLANS? DO YOU PLAN ANY VISITS, MEETINGS WITH LEADERS OF OTHER COUNTRIES?

– We will not reject any proposals that could be beneficial for the people of Belarus and help our people fight for their rights.

I am here and will do anything in my power to be useful to people and help them in their fight for a new, fair and transparent election.