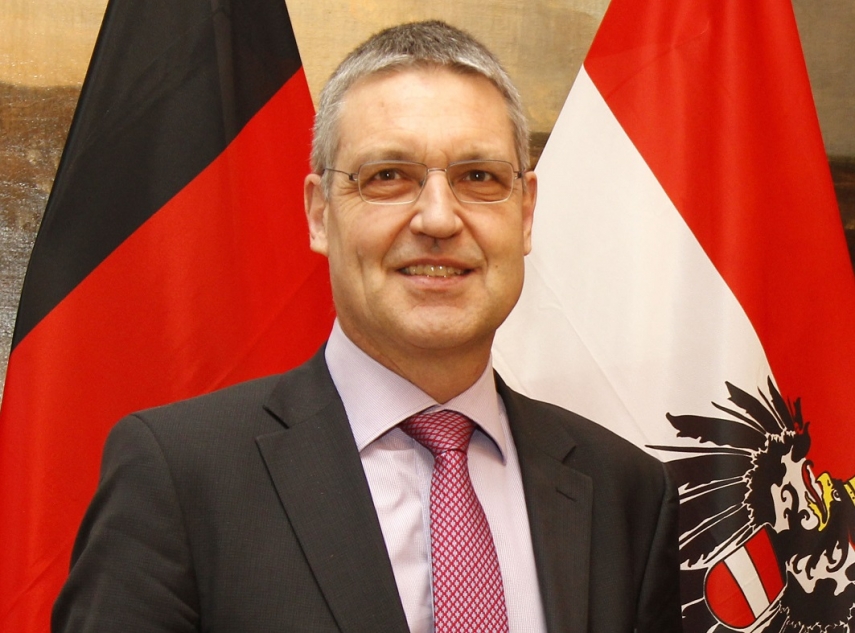 BRUSSELS - The head of the Delegation of the European Union to Russia, Markus Ederer, undertook an official demarche on behalf of the 28 EU countries on Wednesday with respect to Russian Deputy Foreign Minister Alexander Grushko, an EU official told Interfax in Brussels.

The EU official said that the ambassador has confirmed the EU's well-known stance regarding the continued illegal detention of Ukrainian naval sailors in Russia, as this was stated in EU High Representative for Foreign Affairs and Security Policy Federica Mogherini's EU statement and in several public statements, including those on January 17.

The interlocutor of the news agency said that the EU was expecting Russia to provide the unhampered and free passage through the Kerch Strait into the Sea of Azov and backwards in line with international law. Besides, he said that this use of force by Russia had been unacceptable. He added that the EU was also expecting that Russia would immediately and unconditionally release 24 Ukrainian naval sailors, who have been seized, and would observe their rights for legal support and the unhampered access to them for consular authorities and would provide injured crewmembers with the proper medical aid.

On January 30, 2019, Grushko received Ederer at the latter's request, the Russian Permanent Mission to the EU said earlier on the same day.

"Certain aspects of Russia-EU relations and the Ukraine situation in the context of the Ukrainian military ships' violation of the Russian border in the Kerch Strait area on November 25, 2018 were discussed at the meeting," a statement posted on the Russian Foreign Ministry's website said.

"The Russian official called the attention of his interlocutor to the need for the EU to take a principled approach to flagrant violations of human rights, discrimination against ethnic and language minorities, and manifestations of neo-Nazism and anti-Semitism in Ukraine," the ministry said.

On November 25, 2018, Russian border guards used weapons to stop three Ukrainian naval vessels, the Yany Kapu tug and the Berdyansk and the Nikopol armored gunboats, which were traveling from Odesa to Mariupol in the Kerch Strait. The vessels were escorted to Kerch.

The Federal Security Service (FSB) said the ships entered Russia's territorial waters on orders from Kyiv and described the incident as an act of provocation coordinated by two Ukrainian Security Service officers. Russia also said that Kyiv did not duly notify it that naval vessels were planning to pass through the Kerch Strait.

Kyiv called the border guards' actions unlawful and accused Moscow of violating the UN Convention on the Law of the Sea and a treaty between Ukraine and Russia on cooperation in using the Sea of Azov and the Kerch Strait.

Courts in Simferopol and Kerch remanded the 22 sailors and two Ukrainian Security Service officials in custody until January 25, 2019.

The Ukrainians are charged with "conspiracy by a group of persons or an organized group to illegally cross the border using violence or the threat to use violence." If found guilty, they could face up to six years in prison.

Kyiv calls the detained sailors prisoners of war. The Russian authorities say they cannot be regarded as POWs, as they are charged with a crime and Russia and Ukraine are not in a state of war or military conflict.