Going against the grain: a bright Lithuanian MP paid a heavy price for support of partnership bill 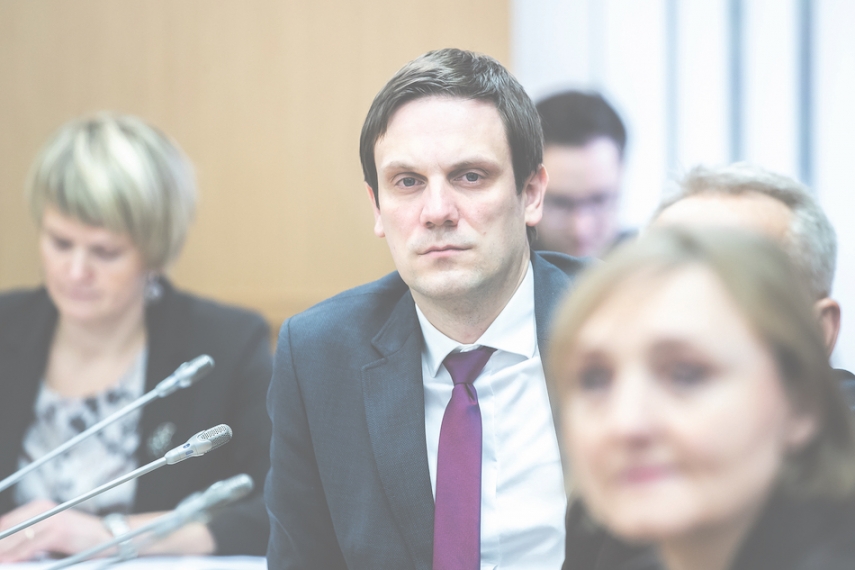 Support for a contentious gender-neutral bill has cost Tomas Tomilinas, a propitious and bright MP of the opposition Farmers and Greens Union (LFGU, LVŽS in Lithuanian), dearly. The party‘s council has kicked out the 38-year-old parliamentarian from all executive posts of the party and Ramunas Karbauskis, the LFGU chairman, excused himself for what he called was the “fellow party member’s inappropriate behaviour and treason of his voters.” The Baltic Times spoke to Tomilinas before he heard the party’s cruel decision.

You were the only lawmaker who broke the LFGU ranks and who voted for the commencement of deliberations of the partnership bill. Why? Did you pay a price for that?

Yes, I did. I have lost the support of many voters, party leadership is blaming me, but I hope I can show the way out of the “cultural war” – start the dialogue in parliament, not in the street or park. Some people in the party hate this plan, but there is a minority in the party that understands me and how important it is not to radicalise cultural issues. My decision is also strengthening alternative voices in the party.

The rural voters, the traditional electorate of LFGU, are uneasy – and clamouring disapproval – of the liberal agenda of the current conservative-liberal government, I mean first of all the striving to pass the gender-neutral partnership bill. Do you believe “cultural wars”, a term used to describe heated discussions on LGBTQ+ rights and the partnership bill, will be over in Lithuania in the foreseeable future?

I think “cultural wars” will not be over, but it only depends on politicians if they will fuel the tensions or try to cultivate their electoral gains on these “wars”. The concept of human rights is not clear to the broad public. My mission is to raise awareness on why defending minority rights is crucial for real democracy and why LFGU politicians can support the alcohol ban and LGBTQ+ rights at the same time.

Being a father of five children definitely makes you unique in the Seimas, especially considering you’re just 38. Did you support the much-publicised march in May ostensibly aiming to defend traditional families? Where do you see families needing more protection? And what is family to you?

I am a father of 4 children. I did not support the march, since its main message was homophobia, not the family policy or protection of the rights of the children. I had worked hard in Parliament for families, especially those who have less money. We passed the historical children protection bill in 2017 banning the physical punishment in family. So the LFGU record in human rights is positive so far and I do not want anybody to destroy it.

You’re one of the youngest Lithuanian MPs and, correct me if I am mistaken, one of three youngest MPs in the Seimas’ Lithuanian Farmers and Greens fraction. Yet many young people in Lithuania do not find being a politician attractive.  Why? Is this going to change? Do you support the liberal Laisve party’s initiative to lower the age of eligibility to Seimas to 21 years?

I have a better proposal. I suggest to lower the age of voting for local elections to 16 years. This will make real change, especially in regions, where youngsters decide to escape their town very early because of feeling powerless to change things even on a local level. So I will try to negotiate my idea too with those who vote for Seimas/21.

You’re counting your second term in the Seimas, where the LFGU (LVZS) is in opposition now. Speaking of the 2016-2020 Seimas term, during which your party played first fiddle as the ruling party, what do you believe it succeeded in? What do you see as the biggest achievements of your party in the 2016-2020 government? Can you also speak of the setbacks you had?

I am proud of our socio-economic policy: the economy was growing by 4-5 per cent; we used the organic results of this economic growth for ambitious social targets. Families got 70-110 eur/month per child. This is real money in Lithuania, often crucial not to get into poverty. Our pension reform was successful for both generations: for the young and the old. I am also happy that we managed to balance the business and working people’s interests and strengthen the social dialogue. I think we failed to be a really green government, however, we made car-tax possible and ambitious energy strategy was passed. We also managed to implement reforms in the public sector (salaries up), innovation policies (investment up), however, we failed to provide clear vision for education reform.

What do you make of the current conservative- liberal government? What do you like about it and what not?

I think the conservatives did not have a plan for social-economic policies, I do not read it from the government papers. They are acting more or less on intuition and opposition is a strong factor. I see their ambition in education policies, but I think they are wrong in definition of the main problems in the field.

As a graduate of political sciences, can you try to envision short-term and long-term implications of the COVID-19 pandemic geopolitically? Will the world become more united or divided after it? What are the lessons to be learnt by everyone, including Lithuania?

The world, and especially neo-liberal Eastern Europe, will learn many lessons: how important state aid is for business and, thus, taxation is an “asset”, how vulnerable we are in terms of the impact of conspiracy theories. For our party – one of the main pillars was a natural immune system (do not link it to anti-vaccerism). We always promoted healthy life-style, sports and prevention of diseases. These topics will be important forever.

Do you believe the world, and Lithuania too, are weary and wary of new pandemics and new restraints as a result, is on course of seeing a new rise of nationalist, ant-globalism-riding governments?

Most of the radicals in Lithuania and globally use pandemics in the political agenda, there is a need of political leadership to overcome the sociological consequences of pandemics: we have to stop shifting the responsibility to medicine and experts and try to win over the people’s mind. Just like our government managed to persuade the majority of people that alcohol is bad and more restrictions for purchase or use is good for the society even if one person feels less comfort. These bans are based on public support and do not violate human rights. Always remember Norway, Sweden, Finland, for example!

Some political analysts have said that the LFGU is a one-Seimas-term project. What would you say to that?

I have been in the party for almost 20 years and twice the party was in government. Sounds strange.

What is your stance on what is going on over the border in Belarus? To what extent do you embrace sanctions against the authoritarian regime? Are you worried that they can hurt the interests of Klaipeda port, where Belarusian cargo makes up approximately one third of the port’s yearly cargo volume?

Are you concerned about a rise of an ultra-left party in Lithuania? There are rumours it is in the making in Lithuania. Would it have a potential? Would it possibly hurt the LFGU?

I think the left is so weak in Lithuania, so any strengthening of values-based left politics is good for Lithuania and my party. LFGU must strengthen the left identity.

Where would you like to see yourself in 10 years from now? Still in politics? Perhaps chairing your own green party?

I am a vice-chair of the LFGU. I hope I can make a change and shift the party towards European green identity and avoid sinking in radical right-wing populism. This is very difficult task. The temptation for “Trumpism” is very strong and lack of left-wing tradition due to the brutal Soviet legacy makes its negative impact. In the 1918-1940 period our party was the most progressive left-wing force (remember President Kazys Grinius) in inter-war independent Lithuania, but the Soviets destroyed everything and even memory among peasant-farmers. This year I published my book on the main political myths in Lithuania. While being a politician I try to be an educator as well. If I fail to continue being both, I will choose the role of educator.