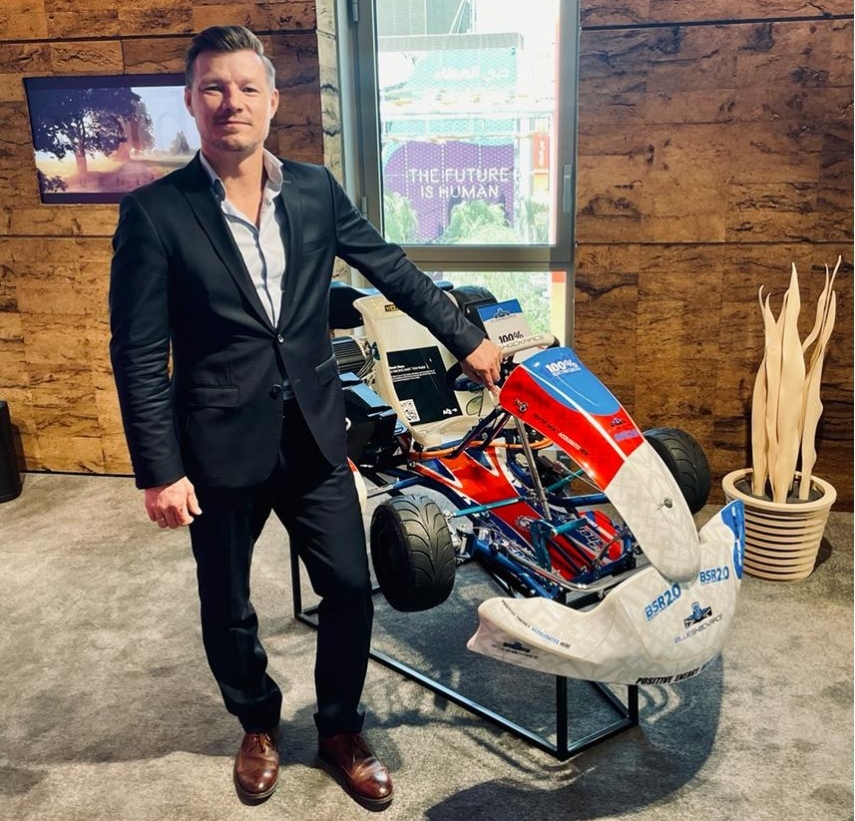 “I doubt it’s possible to climb any higher in the karting industry,” says Blue Shock Race CEO Artis Daugins, who has taken an innovative idea and turned it into a globally renowned brand in partnership with his business angel Girts Celajs. This year their go-karts built in Liepaja will be used in the Electric Karting Championship in Monaco. This is because, after testing F2 and F3 drivers admitted that they’ve never seen anything better. The company’s value has grown from €150,000 in 2016 to €15 million in 2021.

This is thanks to Artis’s passion and ability to develop a product to an unprecedented level. The focus of both the team and the strategic development of the business are maintained through Girts’ patience and belief in the team success with combination of Aigars’s motor racing experience and personal investments of family money and time.

After a car crash on a motorway in Poland in January on the way to testing at the Monaco Electric Kart Championship, Artis’s response was, “Let’s keep going! This is no time for faffing about!” Together with his colleague and partner Aigars Zviedris, they’d just crashed into roadwork barriers at a speed of 120km/h, rebounded off a heavy goods vehicle in the adjoining lane, ending up flying into the barriers. The body of their Tesla Model S was completely wrecked, but everything inside the car or boot was untouched – it was even possible to switch on the heat and charge their phones. As for driver and passenger, they were completely unhurt. “Of course, we could have sat there crying, but there was no time. Two hours after the accident, we were on our way. And 14 hours later – we arrived in Italy, where we put our drivers into the kart. We’ve got to keep going, no matter what it takes” says Artis.

After this incident, Girts insisted that the company’s management had to change its transportation policy, so that in future they would either fly or use drivers for long trips, to keep top management on track and be able to steer the company further up.

Artis’s idea is based on his green view of life: a world in which people can travel about quickly and conveniently, without generating emissions.

When Artis was 21 years old, he developed an electric taxi project for Liepaja, at which point he approached Girts. I told him that there was not much potential – the market was small and limited.

Meanwhile Artis contacted a Vice-President of Tesla and agreed that Liepaja would be the first city in Europe to receive delivery of three Tesla Model S cars. The banks said no to Artis’s idea, but the idea of electric transportation continued to burn within him.

Over the course of a year, Artis figured out how to build electric bikes, but the true hour of success for this production, sales and rental project had not yet come. Despite this, the fact that he’d learned about the technology of producing electric vehicles from top to bottom inspired him, and gave him the determination to create something more unusual and powerful.

Electric go-kart production is the outcome of an unusual bet. During a conversation with Janis Krastiņs, Head of the Latvian Automobile Federation’s Rally Commission, Artis learned that karting is the basis for all motorsport. He got the idea that he had to build electric go-karts! Krastiņs called this idea complete baloney, but Artis’s ambitions were so great that he invested €10,000 to give the boy a chance to build an electric go-kart that could outperform petrol engine karts. The result was the first prototype and the birth of the Blue Shock Race karting brand.

More serious growth started in 2015, when the business changed its form to SIA Blue Shock Race, and we were joined by businessman Girts Celajs. We’d previously discussed some of my ideas, including electric taxis, but he decreed that he had to see the potential to earn millions.

These days, this is the reality, thanks to Celajs coming on board as a business angel and strategist. In the first few years, he invested 200,000 and patiently worked with us to establish a profitable business. Currently our turnover can be measured in millions, and the company employs over 40 workers. Go-karts built in Liepaja have been sold in over 15 countries including the United States, Monaco, Qatar, United Arab Emirates, Hong Kong, Singapore and elsewhere.

This year Blue Shock Race represented Latvia at the EXPO exhibition in Dubai. Currently we’ve got the Karting Championship in Monaco and the South of France. We’ve got an great opportunity with the world’s leading kart builder to manufacture power chains for them. We’re negotiating with the organisers of the FIA World Karting Championship about a test series this year.

Artis admits that the basic formula to make their dreams come true is the so-called programme that goes by the name of LYB. If you don’t what it means, he explains that it’s very simple: lift your butt.

“In the sport business, we’re offering an exclusive product, so we’ve got exclusive clients, and they need an exclusive approach. Yes, maybe there are clients, who you shouldn’t indulge too much. As Girts says, “Want it? Buy it. Don’t want it? Don’t buy it. But you do need to indulge a client if you sense that through it you can gain access to things and places that would otherwise be off limits to you. This was our key to reaching Monaco,” admits Artis.

“I often tell Artis to devote more energy to growth potential. You’ve achieved your first dreams. Your product is the best and is globally well recognized. You’ve got orders from clients, but the next level is scale is volume, efficiency and more scalable products. Right now, that clearly translates into a power chain and battery technology, which will take the company from being in comparatively limited business to potential Unicorn [in investing terminology, a unicorn is a business that reaches a value of over USD 1 billion]!” says Girts.

Girts Celajs is BSR first investor, Chairman of the Board, responsible for strategic development and business controls.

Artis Daugins is BSR founder, CEO and Member of the Board, responsible for sales and product development.

Aigars Zviedris is BSR second round investor, Member of the Board, responsible for product development and production efficiency.