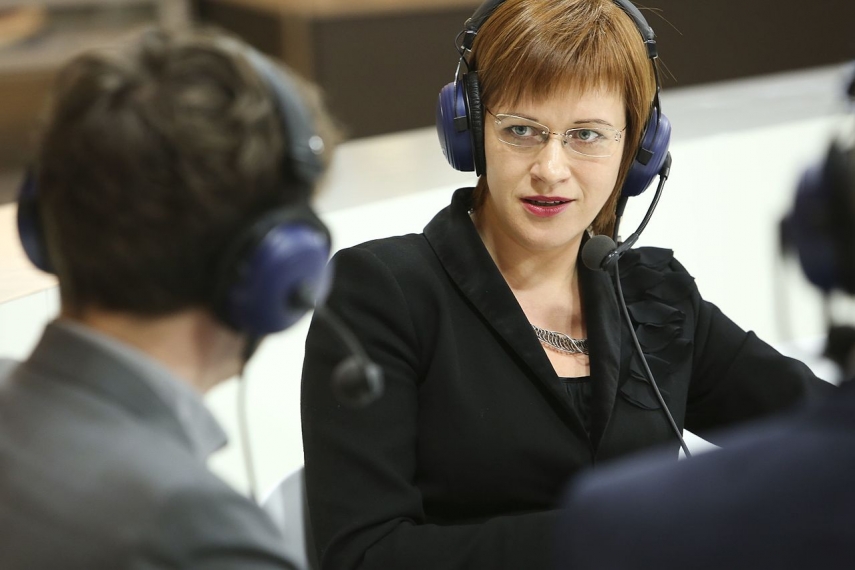 RIGA  - On February 1, the Parliamentary Secretary of the Ministry of Foreign Affairs, Zanda Kalnina-Lukasevica, made a presentation at the "Import. Export. Development. 2017" forum addressing the impact of geopolitical processes on the development of import and export across the globe, in the Baltic states and Latvia, BNS learned from the Latvian Foreign Ministry.

In her remarks, the Parliamentary Secretary noted that trade policies are increasingly being influenced by globalization and changes in geopolitics. This is both posing challenges to and creating opportunities for Latvian businesses. Notwithstanding recent rapid developments in the world, Latvia's diplomatic service is working with a clear aim – to protect the security and economic interests of the country, emphasized the Parliamentary Secretary.

Kalnina-Lukasevica confirmed that the Foreign Service in 2017 will continue providing practical support for businesses with the focus on exports in the sectors of transport, logistics, food industry, information and communication technologies, pharmaceuticals, timber processing, tourism and higher education.

"Latvian embassies abroad have been charged with concrete tasks to facilitate Latvia's external trade, expand export markets, attract foreign investments and promote tourism. We are ready to adjust the tasks entrusted to embassies in order to address the interests and needs of Latvian businessmen," the Parliamentary Secretary stressed.

Despite global turbulences, industrial output in Latvia in 2016 has increased by 10 percent. "Latvian companies have been able, as one market was closing down, to rapidly enter a number of new ones. In recent years, export has expanded to South Korea, China, India, the Gulf States, as well as to Central Asia and the EU Member States," Kalnina-Lukasevica noted.

The Parliamentary Secretary also emphasized that 2017 will open new export opportunities, as several important international agreements have been signed. Kalnina-Lukasevica pointed out that the EU-Canada Comprehensive Economic and Trade Agreement (CETA) signed last October is the most far-reaching agreement negotiated by the EU so far: "I hope that the trade agreement with Canada will be provisionally applied as early as this spring. This will open new attractive export opportunities for our businesses."

Kalnina-Lukasevica stressed that the ratification of the World Trade Organization's (WTO) Trade Facilitation Agreement is nearing its close. The new agreement contains provisions for cutting red tape in cross-border trade and expediting the movement, release, and clearance of goods. Thereby the agreement will also help Latvian businesses interested in new export markets by opening opportunities for their easier access to the markets of the 164 WTO member state markets and other countries.

In the context of information technologies – a sector of high importance for Latvia, Kalnina-Lukasevica noted that the Information Technology Agreement (ITA) expanded in 2016 is expected to eliminate tariff lines accounting for around of 90 percent global trade in IT products. "According to WTO estimates, the tariff reduction will cover IT products valued at USD 1.3 trillion per year. This is a major step in the opening of the IT market, which will stimulate economic growth," said the Parliamentary Secretary.

The speakers at the "IMPORT. EXPORT. DEVELOPMENT. 2017" forum included: the Ambassador of Canada to Latvia, Alain Hausser; the Ambassador of the United Kingdom of Great Britain and Northern Ireland, Sarah Cowley; the Chairman of the Board of the Business and Industry Advisory Committee to the Organization for Economic Cooperation and Development (OECD), Ole Johansson; the Chairman of the Council of the Latvian Chamber of Commerce and Industry, Aigars Rostovskis; and the Director General of the Employers' Confederation of Latvia, Liga Mengelsone. Representatives from Latvian export companies and innovative businesses and experts in transport and logistics shared their experience during the event.

The forum brought together more than 250 participants, including Latvia's largest exporters, and was co-organized by the Latvian Chamber of Commerce and Industry and the Employers' Confederation of Latvia.