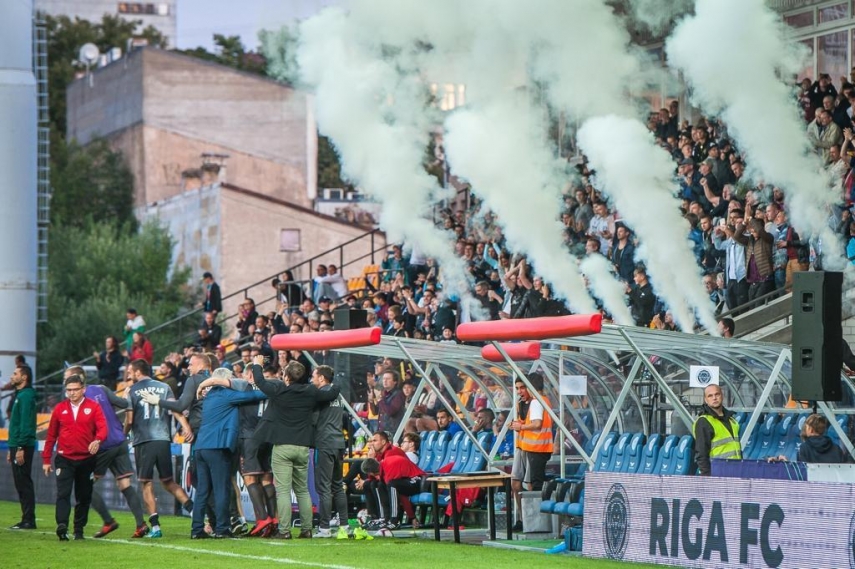 On 24 September, Latvia’s strongest football club “Riga” played in Skonto Stadium against Glasgow’s grand team “Celtic” in the 3rd qualification round of the UEFA Europa League. With each year, “Riga” brings more and more famous clubs to Latvia. One of the goals is to announce themselves increasingly louder on the football map of Europe, but at the moment “Riga” is convincingly the most active club in developing the football infrastructure in Latvia.

Aleksandrs Proņins, the Director General of football club “Riga”, confirms: “Within Latvia, we have to win both in the championship and in the cup competition! In Europe? We will go step by step!” To ensure going step by step, "Riga" is currently building its sports base in Piņķi, developing the idea of a football academy in Ķeizarmežs, and ensuring that the Latvian national team can return to Skonto Stadium again. These plans are scheduled to be carried out in the next three years.

The most topical issue is the establishment of its own sports base, because the club's athletes spend their trainings and competitions in the rented Skonto Stadium. The Director General of the club Aleksandrs Proņins confirms that the search for a permanent home has taken place since the foundation of the club in 2014, but this year a contract for the establishment of a sports base in Piņķi has finally been signed, and construction work has already begun. In three years, a stadium with more than 15 hectares will be built with a capacity of 5,000 spectators and the latest, 7th- generation, artificial surface with a watering system and heating, so that games can take place even in cold weather. There will also be 3 areas with a hybrid cover (natural cover with 10% man- made fibers). Such areas are currently used in Real Madrid and Tottenham Hotspur training bases. There will also be 4 artificial turf pitches and two beach football pitches. Both a hotel and apartments for footballers for a long stay are planned, possibly also a martial arts hall. Of course, a gym, a swimming pool, so that footballers can fully recover after heavy training and games. A full-fledged arena with 1000 seats will also be built.

Proņins remembers a time when the club in Riga had nowhere to spend the first part of the Higher League game season: “Before the 2017 season, the club already had higher aims. And it is clear that we also wanted to play in Riga at the beginning of the championship. We saw RTU Stadium as the best option, but the Higher League games were not allowed to take place there. There were no nets behind the goals, no grandstand with 250 seats, there was a lot missing. Following a contract with RTU, we eliminated all the shortcomings, and the stadium gained the right to host the Higher League games. These were, in principle, the club's first investments in the Latvian football infrastructure.”

The club intensively takes care of the new generation of athletes, therefore in Ķeizarmežs, in the territory currently being rented, the idea of a football academy is being developed, for the needs of which a modern sports base is being created. One natural surface has already been created there, a square opposite the hotel has been renovated and another new artificial surface is being laid in. A grandstand with 500 seats will be installed very soon, changing rooms will be renovated, the hotel will be reconstructed and 30 rooms will be completed. Already now, the most talented young people from the regions are coming to the academy to learn the football alphabet and train. The football club also plans to open 6 sports halls with a size of 50 to 70 meters throughout the city.

At the same time, Skonto Stadium is being managed and improved, where, thanks to the football club "Riga", an excellent natural lawn and a new irrigation system have been installed, ten changing rooms and all lodges have been repaired, the roof has been restored, lighting in the stadium and the hall has been improved, soon there will be the long-awaited input control devices.

"I will not hide that it has been a very big investment. Every effort was made to host European-level games at both club and national level. We are ready to receive 8,500 spectators!” A. Proņins, the Director General of the club, notes the performance at Skonto Stadium.

Proņins brings back to memory a case couple of years ago when the Latvian national team's game against the renown Portugal was threatened: “Let us remember the situation when the Latvian national team's game against Cristiano Ronaldo and other European football stars was threatened. There was a conflict between the stadium seller and the buyer, which resulted in the removal of chairs in the stadium stands. We were the ones who gave the money so that the chairs could be put back in the stadium and the game against Portugal would take place. We also renewed the VIP box already that year, ”the Director General recalls the first investments in Skonto Stadium.

For two years in a row, the football club "Riga" has won the Latvian championship, has once won the Cup Competition trophy and has brought to Riga strong European clubs, which has also been appreciated by fans from full stands at Skonto Stadium.