CEO of Girteka Group: the prices of transportation could grow as much as 20-35% in Europe 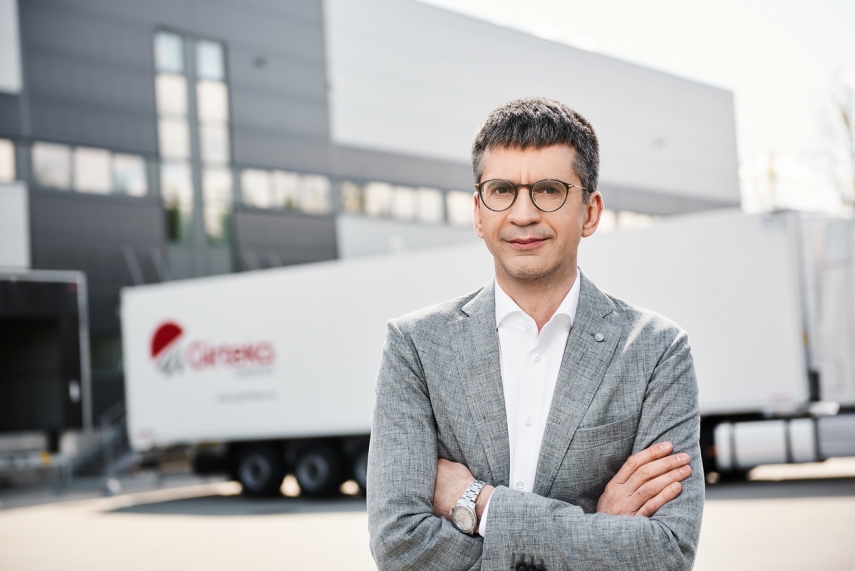 Edvardas Liachovičius, the Chief Executive Officer (CEO) of Girteka Group, the largest asset-based logistics company in Europe, speaks about the current situation in the market, exploring tendencies and the most important questions that road freight transport companies have currently.

“Throughout the 25 years of working in the industry as an executive, I have seen and experienced a lot of different market situations in logistics. Yet the current state of affairs is truly one of a kind – while there is a huge demand for transport services, the industry is still struggling, as truly unique economical conditions are present in Europe.

Despite the temporary setback in March 2020, road freight transport companies’ trucks have not stopped moving one bit since. The average prices for services across Europe have risen correspondingly. You would think that this would benefit carriers, making it a carrier market – yet on the contrary, as the global economy attempted to adapt to the swings in demand for goods, the prices for the most important materials continued growing. That included oil, and as the price for the commodity began to climb, so did the operating expenses for transport providers.

Despite consumers spending more than ever during the pandemic, resulting in rising demand for Full Truck Load (FTL) capacity, carriers had to deal with inflation. Inflation meant rising costs for necessities for everyone, including truck operators.

Operating costs are growing due to ever-rising fuel prices

While the most obvious item whose price has risen over the past year or so is fuel, other operating expenses have gone up as well, ranging from salaries, administrative costs, to basic truck and trailer maintenance.

More than one-fifth of transportation costs are related to fuel. Combining this with the fact that, per the EC’s Weekly Oil Bulletin, fuel prices have reached and plateaued at their record-high prices of around €1,500 per 1,000 liters of fuel in the European Union (EU), with the Eurozone’s average prices being around €1,530 per 1,000 liters of fuel, the largest slice of the operating cost pie has only continued to grow. Even rising gas prices have a negative influence on the average logistics company, as the price of AdBlue has continued to climb due to the status quo with natural gas.

The pandemic has affected the industry’s administrative costs as well. In order to protect our employees, our customers’ employees, and the communities around us, we began issuing personal protection equipment, including masks, gloves, and disinfectant.

Trucking companies have also experienced growth in operating costs due to the fact that there is a clear lack of human and vehicle resources. While Europe has experienced a driver shortage like never before, truck manufacturers have also struggled to produce enough trucks for road transportation providers globally, especially as there is a shortage of semiconductor chips that are responsible for various systems on trucks.

Both cases, due to the relationship between supply and demand, mean that logistics companies have to spend more to have enough resources. The issue of lack of drivers has never left the minds of fellow logistics executives, as it has been an ever-present issue. However, Girteka Logistics has looked to proactively solve the issue by looking at the foundations of what we have to offer our potential colleagues. So far, none of our trucks are sitting idle at our transport bases and are continuing to move daily, proving that we have been successful in retaining and recruiting drivers, as well as being able to find the right solutions for our customers. While having a very young fleet of trucks means we are more efficient in terms of our costs, we also provide a more comfortable environment for our drivers that eases their stress and workload. While the pandemic has worsened the driver shortage in Europe, it also showcased how absolutely crucial the profession is to the well-being of everyone in the continent, as our drivers were the ones that kept supply chains from ripping apart at their links.

United as an industry, we have to look at the resting and parking facilities in Europe. Making drivers feel as comfortable as they can be while they are far away from home will only encourage them to stay in the profession and continue delivering the most important goods to consumers, ranging from food to pharmaceuticals. Still, a shortage means that we have to ensure that we employ enough drivers to keep our trucks moving. That means that we had to look at their earnings and raise them several times over the course of the year to remain a competitive and attractive employer. We have worked very hard in this area, and we can proudly say that 70% of our current colleagues have recommended working at Girteka Logistics for their friends and their relatives.

Similarly, a shortage of semiconductor chips has resulted in rising prices for new, and subsequently used, trucks, as manufacturers have struggled to finish enough vehicles to satisfy the needs of European road freight companies. Such a situation is putting upwards pressure on ownership costs for commercial vehicles.

All challenges lead to rising prices

With the logistics industry not standing on firm ground heading into the winter, any kind of movement could once again disrupt the market. Nevertheless, envisioning a scenario where trucks would stop moving is hard, as the very first wave of the pandemic showcased that despite the uncertainty, we continued to deliver on our customers’ promises and delivered essential goods to supermarkets and other stores' shelves, including medical supplies.

We still could see a scenario where the prices continue to rise, despite our belief that they still have not yet reached the levels that they are supposed to. The average price for a load in Europe has already reached record-breaking levels, but the continuously rising inflation and any kind of disruption to global supply chains could send out a ripple effect to our local economies, potentially increasing the costs of transportation between up to 20% and 35%. The prices, naturally, would follow suit and threaten the well-being of carriers and shippers alike.

Shippers, no matter how big or small, had to adapt to the new market reality as well. However, what has to be considered is that road freight transport providers are not immune to cost pressures either, as rising raw material prices, including oil, affect trucking companies as well. Fuel is a particularly sensitive topic to carriers, as mentioned above, on average, over 20% of the total operational costs for a road freight transport company are related to the liquid you put in a tank.

Further regulatory changes are also coming in 2022, as the EC Mobility Package will include new rules for transport companies. They will, undoubtedly, improve the working conditions of our colleagues on the road. While potentially it could result in higher transportation prices, Girteka Logistics has been preparing for the changes and made the decision to expand its presence in Poland, allowing us to be closer to our customers with our expanded presence in Western Europe.”

Girteka Group is the largest European asset-based transportation company, transporting more than 820,000 full truck loads every year. The company grew from 600 trucks in 2010 to 9,000 trucks in Europe, Scandinavia and CIS countries in 2021. With over 20,000 professional employees, Girteka is a leading full truck load transporter and the first choice by the largest global brands.