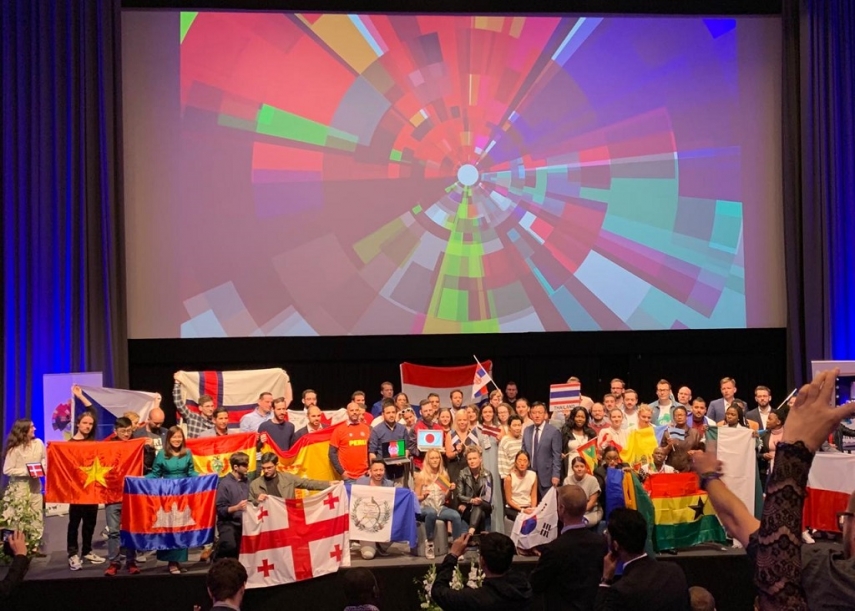 From 1-2 July, Copenhagen hosted the Global Finals of the international competition Creative Business Cup 2019 (CBC). Among the representatives of 63 countries competing for the title of the most creative start-up company in the world and the main cash prize was the winner of Latvia’s CBC national competition – Babbit, innovative music playing hardware for kids with a screen free solution. Although Latvia did not make into the final, the company attained international recognition and feedback that will help it to enter the global market.

“Although we didn’t receive any prizes, several members of the jury favoured us. For example, Mette Fløe Nielsen, a business consultant and business angel investor from Denmark acknowledged that, viewed from a business perspective, a limiting factor for Babbit is its complicated production. At the same time, she added that would like to buy this product for her family. We also received complements for the product design, idea and special praise for our presentation. For this, many thanks to our designer Maija Rozenfelde,” stresses Babbit co-owner Liene Roga, who pointed out that several product order were received, which will be exported to Denmark, Canada, Finland and Serbia when Babbit goes on sale.

Commenting its rivals in the competition, Babbit gave best to the representatives from Australia, who also offered a product intended for a kids – audio stories. “As the jury later commented, the Australians received more points because of scalability and distribution potential, because their product is virtual,” said Roga.

“The main benefits were high level presentation training, expansion of our network of international contacts, advice on the product from investors and feedback from other participants. We received several recommendations including a suggestion that we should create audio games with kids with educational content. Contacts in 65 countries around the world and among CBC national partners  are also invaluable. They will be useful to us when we start our crowdfunding campaign and in seeking retailing and information distribution partners globally,” explained Roga.

Also present to offer support and observe the competition in Copenhagen was the Head of the Investment and Development Agency of Latvia (LIAA) Creative Industries Incubator Karine Kalniņa. “A wide range of businesses took part in the competition with mutually incomparable business ideas at varying stages of development. I believe that Babbit is superior to a number of those presented this year. Although we were not among the finalists, Latvia announced itself with a high quality product, refined right down to the tiniest details, which is still only preparing to enter the global market.

Moreover, it is not just kids who are enthused by it – we saw the joy and interest that Babbit generated, when it was tried out by the jury and representatives of other countries,” explains Kalniņa, commending the start-up for its goal-oriented approach and the work it put in throughout the competition.

To reach the final, the competition participants or CBC national finalists from 63 countries were divided into four groups, which presented their business ideas in parallel rooms for pre-selection by the jury. Two start-ups from each group were then selected to proceed to the semi-final. The jury selected another four competitors out of all the national finalists. A total of 12 participants qualified for the semi-final.

Overall, this year’s competition highlighted and focused on ideas with broad social impact. For example, the winner was a Danish start-up Lapee ( www.lapee.dk ), which has created the first women’s urinals. The runner-up spot went to a designer from Finland (www.deafmetal.store ) who has launched hearing aids with silicon sleeves into which jewelry can be integrated. Meanwhile, third place was awarded to the Czech Republic’s representative for designing menstrual panties ( https://getsnuggs.com ). Karine Kalniņa also explained that special attention was devoted to business development in Africa and other countries in the third world. Start-up founders in these countries receive encouragement even if their ideas were not so much innovative as socially worthy. For example, the concepts that made it through to the semi-final included recycling oil barrels into furniture, transforming coffee grounds into tiles and recycling plastic to produce glasses with a 3D printer.

The business idea for Latvia’s national winning start-up Babbit is innovative music playing hardware, which has been created so that the kids in a family can use Spotify. Kids can play music independently by placing toys on the hardware. Music playlists for children were compiled by four industry professionals: Ingus Ulmanis, Egons Reiters, Andris Sējāns and Kaspars Zaviļeiskis. More detailed information is available at: bit.ly/2JrkOPh.

The Creative Business Cup is a global initiative, whose mission is to boost entrepreneurship and innovations. The goal of the annual competition is to support creative ideas and foster the development of innovations, helping start-ups from various countries around the world to meet investors and potential business partners, reach the global market, find new contacts and attract additional funding to facilitate the further growth of their business. Last year, in the face of stiff competition, the Latvian company Gamechanger Audio was awarded in 2 nd place.

For the past six years, the selection for the Creative Business Cup competition in Latvia has been organised by the LIAA Creative Industries Incubator. The competition’s partners are: the Ministry of Culture, the Danish Culture Institution, DELFI news portal, the University of Latvia and Microsoft Innovation Centre. To date, Latvia has been represented in the CBC competition by brands including Vividly, Connection Codes, Anatomy Next, GIGI Bloks and Gamechanger Audio.