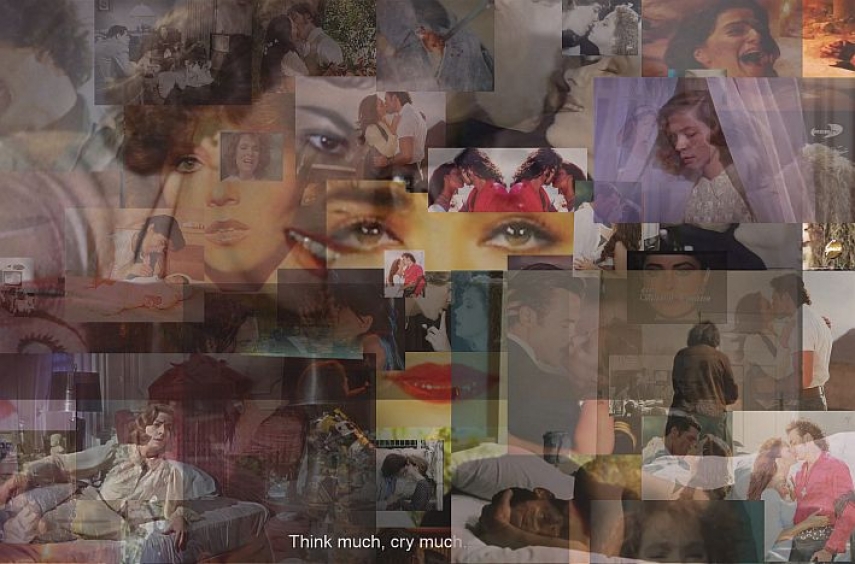 RIGA - From January 18 to February 24, the Creative Studio of the ARSENĀLS Exhibition Hall of the Latvian National Museum of Art in Riga (Torņa iela 1, 2nd floor) will host the exhibition MELOS.

Exhibition MELOS is a collaborative project between artists Anna Ceipe, Vika Eksta and Līga Spunde. The origin of the Greek word “melos” is to be found in the word “mel” from the family of Indo-European languages, which points to a part of the whole. Later it began to refer to a melody or a lyrical poem meant for singing. It is this word’s musical meaning that is related to the notion of melodrama, which, in turn, is known as a specific genre saturated with emotions and feelings.

Melodrama is characterised by often absurdly reductive schemes of the relationships between the characters – either in love or not, or, if one is in love, the other is not. In many cases the word “melodrama” is used as pejorative in connection with exaggerations, banalities and clichés in relationships, yet the depiction of these appeals to a surprisingly broad public. Film scholars of different generations have recognised a powerful socio-critical instrument in the genre that at first glance might appear conservative. The exhibition is based on a scholarly desire to deconstruct the main elements of a melodrama film, and through bringing them together in a spatial composition to enable the visitors to enter the world of melodrama.

When was the last time you experienced a love scene worthy of a film? Have you ever seen yourself in one on screen? The exhibition will provide the opportunity to take the lead role of a melodrama character, with the hope that afterwards love in life will captivate more than love in cinema, or, in the words of a song from the 1956 film Written on the Wind by the melodrama classic Douglas Sirk:

“A faithless lover’s kiss is written on the wind,

A night of stolen bliss is written on the wind.

Just like the dying leaves, our dreams we’ve calmly thrown away.

The promises we made are whispers in the breeze.

They echo and they fade, just like our memories.

Though you are gone from me, we never can really be apart,

Anna Ceipe graduated from the Department of Visual Communication at the Art Academy of Latvia in 2016, and also studied at the Royal Academy of Fine Arts (KASK) in Belgium. Has taken part in exhibitions since 2011. Her most notable projects include personal exhibition Meklējot oāzi [Searching for an Oasis] in LOW Gallery (2018), Apceres apstākļi in Riga Art Space (2016) and the participation in the exhibition Nebeidzamais ceļojums, neredzamā sala in C. K. von Stritzky Villa in Riga (2016).

Vika Eksta is a visual artist and pedagogue interested in long-term photographic projects, performance and research of visual archives. Since 2014, she has taken part in exhibitions in Latvia and internationally. Vika Eksta studied photography with Andrejs Grants and at the EFTI School of Photography in Madrid. The artist holds a BA degree in film theory and an MA degree in visual communication. In 2016, she received the ADC Young Guns Award as well as the Riga Photography Biennial Award for young Baltic photographers.

Līga Spunde is an artist who lives and works in Riga, Latvia. In 2016, she graduated from the Department of Visual Communication at the Art Academy of Latvia. Parallel to her studies, artist has taken part in various projects and exhibitions in Latvia and abroad. Līga Spunde is influenced and inspired the most by the absurd and the supernatural found in everyday events, relationships and observations. The author’s works often are an extremely personal retelling of a story, inviting the viewer to question objective and subjective truth. While Līga Spunde also uses such media as photography and video, installation is a fundamental element in her work, ordering and organising the message.